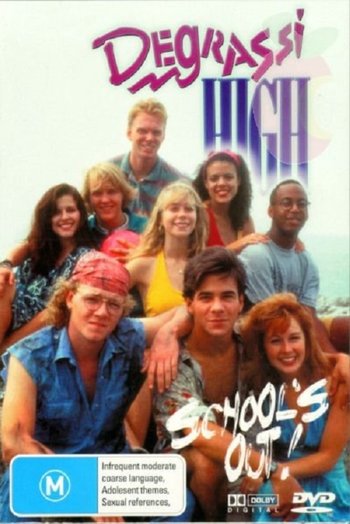 "They've graduated. Now the real education begins."
Degrassi: School's Out! (or simply School's Out!) is the 1992 Series Finale movie to Degrassi High.
Advertisement:

As the title says, school is out, everyone has graduated and are preparing for everything from college to marriage. Joey and Caitlin continue their relationship as they prepare to go off to school. While she is working hard at her job to save money and mulling over taking their relationship to the next level, he decides to carry on with Tessa Campanelli who is willing to give him what he wants, to eventual dire consequences. Meanwhile, as Snake attempts to find some good fortune during this time in spite of his string of bad luck, Wheels is in the throes of his alcohol addiction.

It was Darker and Edgier than the TV series that preceded it, with Downer Endings for nearly everyone, fanservice in regards to Tessa, swearing, Wheels getting incarcerated, and Joey Jeremiah becoming a jerkass. With all of this being said, some other prominent characters of the show also appear but in diminished roles such as Spike and Yick; some characters such as Dwayne and Melanie don't even appear at all. The movie was followed by Degrassi Talks before the franchise went on a nine-year hiatus.

Degrassi: School's Out! has the following examples: