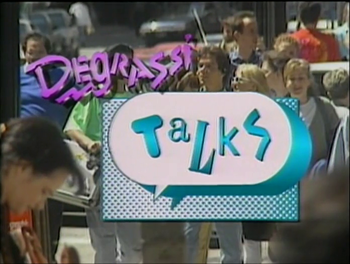 You're not alone, let's do this together!
Degrassi Talks is a six-part miniseries that aired on CBC in February 1992. It is a supplement of sorts to Degrassi Junior High and Degrassi High, except six of the actors themselves; Amanda Stepto (Spike), Pat Mastroianni (Joey), Stacie Mistysyn (Caitlin), Siluck Saysanasy (Yick), Rebecca Haines (Kathleen) and Neil Hope (Wheels), fly across Canada to interview other teenagers in depth about various issues including abuse, pregnancy, depression, alcoholism, drugs, and sex, interspersed with short man-in-the-street tidbits and relevant clips from the two shows. It also features Stefan Brogren (Snake), Kirsten Bourne (Tessa), Darrin Brown (Dwayne), Anais Granofsky (Lucy) and Angela Deiseach (Erica) as either occasional interviewers or interviewees.
Advertisement:

Airing after Degrassi: School's Out!, but filmed and produced first, it marked the end of the original Degrassi generation. The series is available on the Degrassi Junior High DVD set (but not Degrassi High, which is what this series actually followed).

The episodes were also adapted into books with the host of the episode on each cover. The books, for the most part, are transcripts of the episodes with the inclusion of interviews left out for TV. They were prefaced by profiles of the actors and their relation to the topic of the episode they hosted. You can read those introductions here