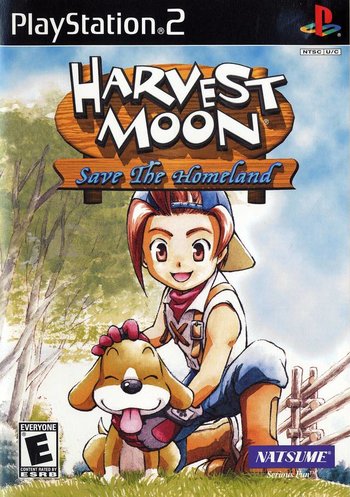 The first Harvest Moon (now known as Story of Seasons) title of the The Sixth Generation, Harvest Moon: Save The Homeland (Ranch Story 3: Ignite the Fire in the Heart in Japan) was released on Playstation 2 in 2001.

You play as a young man (whose Canon Name is "Toy" according to the letter on his hat) from the city who is asked by his father to take care of his deceased grandfather's farm. When you arrive on the farm, you see several Harvest Sprites discussing how to stop the local town from being turned into an amusement park. As you're a rare human who can see Harvest Sprites, they ask you to help them with their mission. After the Harvest Goddess blesses you, you begin your task.

Save the Homeland is an oddball amongst the series. You are only given one year to save the village, however there are several different endings that can be achieved. Though the game features several bachelorettes, you can not marry any of them (and as a result, can't have children). As a result of these changes, Save the Homeland is often ignored by fans, though it has an ever-growing group of fans.