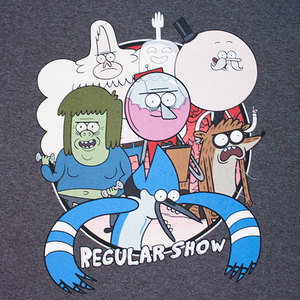 You know who else visits TV Tropes? MY MOM!note Back row: Skips, High Five Ghost, Pops. Front row: Muscle Man, Mordecai, Rigby. Center: Benson. Missing: Thomas, and a lot of other people.
"It's anything but."
— Series tagline
Advertisement:

Wait, you want me to do you a solid and describe Regular Show here?

Alright, but you owe me one later.

So, you got these two 23-year-olds who are best friends. Alright. They work as groundskeepers at a public city park. Pretty normal so far.

They are a giant blue jay and a raccoon named Mordecai and Rigby, respectively, who work for a sentient gumball machine named Benson, and their fellow employees are an immortal yeti named Skips, an overweight, green-skinned guy named Muscle Man, a ghost with a hand on the top of his head named High-Five Ghost, and a man with a giant head named Pops.

Episodes of the show often consist of the two nearly causing the end of the world on a daily basis thanks to various impossible and strange events arising from normal, mundane tasks, like playing Rock–Paper–Scissors and summoning an inter-dimensional monster after getting one hundred ties in a row.

So yeah, it's a regular show. Now about that solid...

Regular Show is the brainchild of J.G. Quintel, who was the creative director of The Marvelous Misadventures of Flapjack, which should explain just about everything.

Premiering September 6, 2010, the show became a surprise hit, with both it and Adventure Time considered as the start of Cartoon Network's renaissance age after years of Network Decay. Like Adventure Time, it was a departure from the network's more kid-friendly programming at the time, having clearly been developed with a slightly older demographic in mind (though not quite as raunchy as anything on their sister station Adult Swim), and became the first CN original to receive a TV-PG rating.

It became praised for its subdued vibe and naturalistic characters, mixed with the absurd stuff that happens or the edginess of its dialogue (with the characters actually swearing). Growing the Beard set in as the series extensively developed its principal cast members, eventually moving focus away from Monster of the Week-styled escapades into problems that its intended audience could relate to, like relationship woes and finding your place in life, while retaining its surrealism. Even when the setting shifted to outer space for its final season, it stayed true to its initial appeal. The series ended on January 16, 2017 after 261 episodes and a television movie, making it the first of the network's big 2010s hits to wrap up.

However, this didn't mean the show was completely over, at least as far as comics are concerned. KaBOOM! Comics started publishing monthly comics in 2013, with the run ending in 2016 at 40 issues. At the same time, graphic novels were released yearly from 2014 to 2017. Near the end of 2017, the comic book universes of Regular Show and Adventure Time combined for the six-issue Adventure Time x Regular Show crossover miniseries. Finally, in 2018, another six-issue miniseries comic entitled Regular Show: 25 Years Later was released, focusing on the Park Crew as depicted in the show's "Where Are They Now?" Epilogue.

After the show wrapped up, Quintel went on to create Close Enough, a Spiritual Successor to Regular Show aimed directly at older audiences, which was originally scheduled to air on TBS in the late 2010s, but instead premiered on HBO Max in July 2020.

As a final aside, some of the main characters' designs in Regular Show come from J.G. Quintel's previous animated student films. Mordecai and Benson were featured in a Mushroom Samba in 2 in the AM PM and Pops as a lollipop ambassador in The Naive Man From Lolliland.

They're both well worth checking out, but definitely not for kids, especially the former.