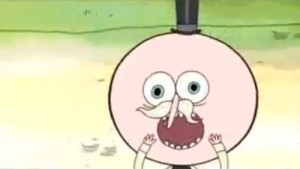 Regular Show has a load of funny moments.

Mordecai: Don't worry, Benson, we respect you. Oh, wait—now I'm taking the respect I said you could have and I'm throwing it away!
Mordecai and Rigby: OOOOOOOOOHHHHHHHH!

521 — Journey to the Bottom of the Crash Pit

526 — Return of Mordecai and the Rigbys

Pops: A brow of grass, and hair of moss, puddles are my dipping sauce, a petal, a wing, an arm or two, presenting a hug from me to you. (hugs a rose bush, moans in comfort) (gets pricked by thorn) Ooh! (Gets stung by bee) Ow! (Gets smacked in head by branch) Ohoo! (Trips over rock and falls knees first into creek) Ooh! (Starts getting bitten by turtles) Oh, why nature, WHYYY?!

615 — Mordecai and Rigby Down Under