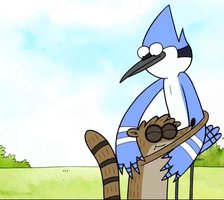 There is some context behind this.context the context being that the Rigby in this picture isn't actually Rigby; he's a doppelganger, and since the real Rigby would never hug Mordecai, Mordecai was able to tell which Rigby was real.

Who says a cartoon can't have Heartwarming Moments? Especially a cartoon as bizarre as Regular Show? Surprisingly, this show had a lot of heartwarming moments that were really genuine.