Western Animation / Sit Down, Shut Up 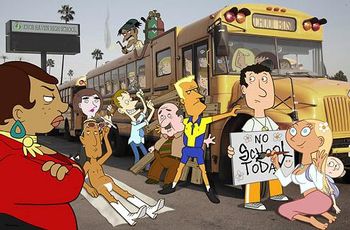 Sit Down, Shut Up was an short-lived animated series that first aired on Fox as part of their Sunday night animation block, premiering April 19, 2009. It is based on a sitcom of the same name from Australia, which was cancelled after 1 season.

The show is about a group of oddball, misfit teachers. It follows the many misadventures they have during their work day. It uses animation superimposed on live-action background shots (similar to what The Amazing World of Gumball would do a scant two years later).

The show is created by the same people behind Arrested Development. Josh Weinstein, a creative talent for a number of years behind The Simpsons as well as his own short-lived show, Mission Hill is also involved. Many talents from Arrested Development are involved in the show as well, including many of the voice actors. When it first premiered, the pilot received mainly negative reviews from national critics. Subsequent episodes were received similarly, with its rating dropping as well. Eventually, because of its poor reception and ratings, it was canceled from airing on Fox prime-time after four episodes. The rest of the episodes (along with the four episodes from primetime) aired at midnight (eastern standard time) on FOX in the months after the network cancelled MADtv and needed filler to air while waiting for the premiere of The Wanda Sykes Show. Eventually, Fox stopped airing the reruns at midnight in favor of reruns from the canceled live-action sitcom Brothers. Sit Down Shut Up aired on Comedy Central from May 2010 to July 2010, with the episodes "Pilot" and "High School Confidential" banned for reasons unknown (most likely content, even though Comedy Central has aired worse adult animated shows than this).