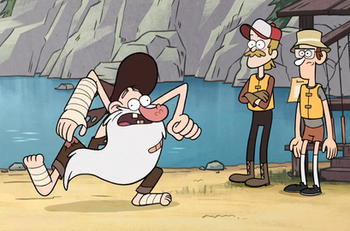 Sanity level directly correlates to shoe quality.
In old times (especially the Victorian era) a lot of attention was given to a person's visual appearance, including clothes and shoes. Ever since then, lack of footwear has been used to portray characters who are mad or at least quirky and out of touch with reality (additional details may include strange and/or unkempt clothing and disheveled hair).
Advertisement:

In modern works, they may be cheerfully eccentric and deliberately flouting social norms, or really unhinged and living in their own world.

Subtrope of Does Not Like Shoes, and often overlaps with The Ophelia. Compare and contrast with Barefoot Sage whose wisdom and enlightenment also places him/her above social conventions (they may also overlap). May also overlap with Magical Barefooter. The extreme version of the trope, when the character in question is lacking any items of clothing, is Naked Nutter.