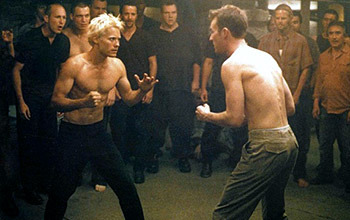 An abandoned warehouse in a peaceful city is used as a rink for suburbanites to set out their differences (or just blow off some steam) through violence, in illegal matches. Usually has a level of secretiveness added to it, and sometimes, when teenagers are the perpetrators, they'll film it and put it on the internet, "the greatest of all evils".

While fight clubs aren't necessarily a bad thing (as long as there are set and agreed-upon rules and all fighters are willing participants), TV tends to demonize it a bit. There have been some real-life examples. They're illegal, what with modern society generally not liking the idea of people randomly hurting each other.

This trope is quite common in Martial Arts movies set in the modern day, as a way to facilitate fight scenes and show off the fighters' moves. Fight clubs in these movies tend to be set up by the bad guys of the movie, and often have their members fighting each other to the death like gladiators in a Roman arena.

Not to be confused with a Club Fight, that is, a Bar Brawl.

"The Way of Vikings" part 2

"The Way of Vikings" part 2