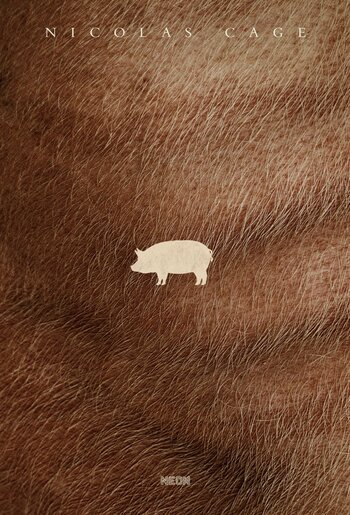 "We don't get a lot of things to really care about."
— Robin
Advertisement:

Pig is a 2021 drama directed by Michael Sarnoski.

Robin (Nicolas Cage) lives contently by himself in the Oregon woods with only his beloved pig for company. They hunt for valuable truffles which Robin then sells to Amir (Alex Wolff), his only contact with the outside world. One day Robin is brutally attacked and his pig kidnapped. He recruits Amir to bring him to the nearby city of Portland and its high dining scene, where's he's forced to confront the ghosts of his past in his search to recover his only friend.

Tropes associated with this movie include: