Film / Every Which Way but Loose 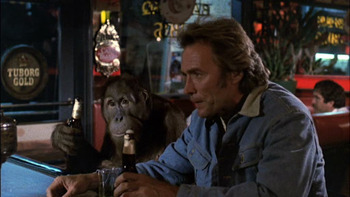 Clint's the one in the jacket.
Cholla: You Philo Beddoe?
Philo Beddoe: Do I know you?
Cholla: You're gonna.
The Audience: That guy's screwed.
Advertisement:

Every Which Way but Loose is a 1978 action-comedy film directed by James Fargo and starring Clint Eastwood as Philo Beddoe, an easygoing trucker and amateur bare-knuckle fighter. With his brother Orville (Geoffrey Lewis), who promotes his fights, and Clyde, an orangutan he won in a bet, he roams the San Fernando Valley in search of fights, music, and beer. Until Philo falls for a country Western singer who then suddenly leaves town — perhaps under duress. This prompts Philo to get in his truck with Orville and Clyde in tow to track her down. Hilarity ensues.

Yes, this movie has Clint Eastwood and an orangutan. You owe it to yourself to see it.

Followed up with a 1980 sequel: Any Which Way You Can, which was largely a rehash of the first movie.

Every Which Way but Loose provides examples of:

Tropes unique to the sequel:

Alternative Title(s): Any Which Way You Can