Film / Every Time We Say Goodbye 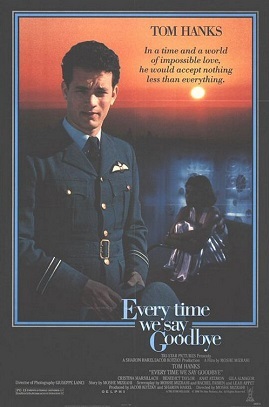 Every Time We Say Goodbye is an obscure 1986 Israeli-American romantic war drama starring Tom Hanks and Cristina Marsillach. Tom Hanks plays David Bradley, an American RAF pilot stationed in Mandatory Jerusalem note (6 years before Israel achieved independence from Great Britain) during World War II. His plane gets shot down somewhere in North Africa, and as a result he gets injured. He stays at a hospital in Jerusalem, Israel to recover from his leg injury. After his broken leg is healed, he realizes he only has three days left before returning to Egypt, so he decides to take advantage of the short time he has in Jerusalem. While he's there, he meets and falls in love with Sarah (Cristina Marsillach), a beautiful, shy Israeli woman of Sephardic Jewish ancestry. Only one problem: David is not Jewish (his father is a Protestant minister!), and Sarah’s family will do everything in their power to prevent their daughter from seeing David.

The film was a Box Office Bomb, making only $278,623 (to this day, it remains Hanks’ lowest grossing theatrically released film, according to Box Office Mojo

). Reviews of the film were lukewarm at best, and the film had a limited release in theaters.