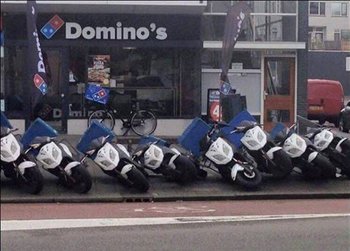 Often there is a row of motorcycles parked at a bar (or restaurant, or any other building, but usually it's a seedy biker bar located on the edge of town). Naturally, someone's going to hit one, and it will fall and hit another, and that will fall and hit another and so on — like the old Disaster Dominoes. That'll get a swarm of (stereotypical) bikers real angry and desiring revenge on the offender. Oh, Crap!

A variant of this is a hero character walking into the wrong bar or otherwise ending up on the wrong side of a group of bikers and being tossed on to the street beaten and bloody by a jeering mob. The beaten hero then takes revenge by sabotaging the motorcycles in this way with his own vehicle or doing something like tying them together so that anyone attempting to chase him ends up dominoing their own side.

It should be noted that this is Artistic License, as in real-life groups like this usually have a low ranking or prospective member guarding the motorcycles at all times - and something like this would fail to happen whether accidentally or by design.

Used either for comedy or as a distraction.

Machines Get Knocked Over

One of the Illegal loggers machines accidentally knocks over another machine causing it to topple the other two machines like dominoes.

Machines Get Knocked Over

One of the Illegal loggers machines accidentally knocks over another machine causing it to topple the other two machines like dominoes.