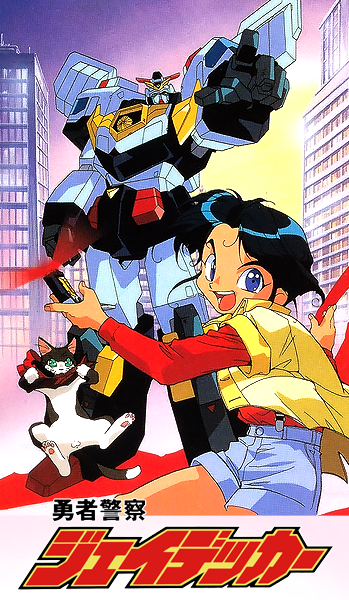 Yes, the kid is only about ten. Take it up with his giant blue (or white) partner if you have a problem.
Advertisement:

Also, The Power of Love!

It starts off with a young boy, Yuuta Tomonaga, stumbling across (or "falling in on", to be more accurate) a giant, half-constructed robot hidden in the basement of (what seems to be) an abandoned warehouse. As a normal boy of his age, Yuuta is thrilled. Yuuta spends the next several months visiting the robot, eventually named "Deckerd", all the while unknowingly granting him a soul and sentience just by being his friend.

Through a series of very interesting events at the start of the series, events that include no less than Deckerd losing his memories of those months spent with Yuuta, gaining them back again in time to punch through an armored truck to rescue his friend when Yuuta gets himself into trouble, and Yuuta being inducted into the police force despite his age (all occuring in the very first episode, no less), the series shows its Aesop.

And also something about how the bonds and partnerships formed between people (particularly humans/robots) are strong and unbreakable and just plain awesome.

More robots are added to the cast, and through Character Development and harrowing ordeals a close knit police unit is formed. Brave Police J-Decker follows their adventures as they work to keep Japan (and sometimes the world) safe.