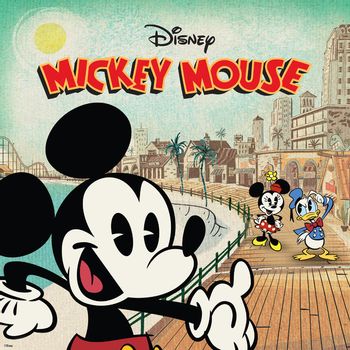 "By bringing Mickey’s comedic adventures to life with vitality, humor, inventiveness and charm, the entire Disney Television Animation team of artists, animators and directors have worked to capture the essence of what Walt Disney himself created 85 years ago."
—Gary Marsh, President and Chief Creative Officer of Disney Channels Worldwide.
Advertisement:

Developed by Paul Rudish, famed for his work on the Cartoon Network shows Dexter's Laboratory and The Powerpuff Girls, Mickey Mouse is a Revisiting the Roots take on the classic franchise. Premiering in 2013, it brings the titular character, Minnie Mouse, Donald Duck, Daisy Duck, Goofy and Pluto in contemporary settings such as New York City, Paris and Tokyo. It takes the humor of Classic Disney Shorts and places Mickey in humorous situations that showcase his pluck and rascality, along with his long-beloved charm and good hearted-ness. The episodes are indexed in the Recap page.

The cartoons have also inspired a Disney Theme Parks attraction, Mickey & Minnie's Runaway Railway. The ride opened at Disney's Hollywood Studios on March 4, 2020, with an west coast version opening at Disneyland in 2022. Walt Disney World also has an exclusive Mickey Mouse cartoon called "Vacation Fun" which is shown at the "Mickey Shorts Theater".

It's important to note that this is the second Disney animated TV show to get renewed for a fifth seasonnote Disney shows produced for the main Disney branded networks (animated or otherwise) are typically only allowed to have 4 seasons (and before that, 65 episodes), the first being Doc McStuffins. In September 2020, it was announced that the series would be retooled into The Wonderful World of Mickey Mouse, a series of 7-minute shorts that debuted exclusively on Disney+ beginning November 18th (Mickey's birthday). Season 2 consists of four half-hour specials themed around the four seasons.

Example of:
I Resemble That Remark!