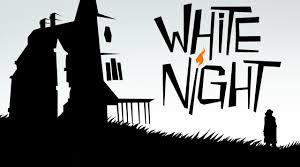 Some nights are just pitch black. Without stars... and without sleep. Like this one night, back in 1938...
Advertisement:

White Night is a horror-noir adventure game made by OSome studio, and published by Activision. It It was released on March 3rd, 2015 for PC and PS4, with a Xbox One version following on March 6th, 2015, iOS on November 15th, 2017, and a Nintendo Switch port on May 17th, 2018. Though it has no relation to the novel of the same name, the two series share similar themes, atmosphere, and the main characters dress the same.

The year is 1938, and after a long night of doing whatever it is our No Name Given protagonist does, he begins to head home. Upon seeing a ghostly woman storm across the road, the man swerves and crashes. Wounded from the crash and with the woman nowhere in sight, he leaves to get help for himself and the girl, he heads into a manor off the side of the road marked "The Vesper Mansion". While the place is seemingly abandoned, our protagonist soon finds that it's still occupied, just not by the living. Trapped in the mansion with no way out, the protagonist uncovers the sinister and tragic history of the Vesper Family, all while slowly getting the feeling that maybe he isn't the only person left in the mansion...

Gameplay consists of the player wandering around the house and solving puzzles. The game's unique mechanics include light-based stealth evasion, a match system in which the player can only light the general area around himself and can only carry twelve matches at a time, and a nearly completely black and white artstyle with nearly pitch black darkness.