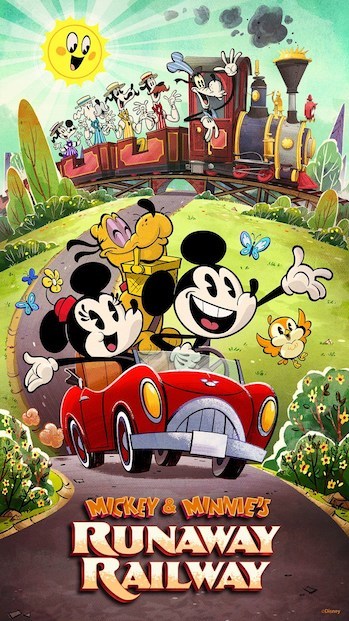 Burst into a world where mouse rules apply.
Advertisement:

Mickey & Minnie's Runaway Railway is a dark ride attraction found at the Disney Theme Parks, based on the 2010s Mickey Mouse cartoons. It opened on March 4, 2020 at Disney's Hollywood Studios in Florida, replacing The Great Movie Ride, and was initially scheduled to open at Disneyland in Mickey's Toontown in 2022, but got pushed back to 2023 due to the COVID-19 Pandemic.

In the past, there were several proposals for a ride based around Mickey Mouse, including Mickey's Madhouse, a wild mouse roller coaster through black-and-white Mickey cartoons in a never-built land at Disneyland called Dumbo's Circusland. Later versions of this concept would be called Mickey's Movieland and Mickey's Studio Tour and would feature a madcap Disney studio tour featuring numerous characters and set pieces.

Housed in the Chinese Theater at Hollywood Studios or the El Capitoon Theater at the upcoming Disneyland version, guests are invited to watch the premiere of a new Mickey Mouse cartoon, Perfect Picnic, in which Mickey and Minnie Mouse and Pluto prepare for a picnic outing and encounter Goofy conducting a train. Guests then pass through a simulated movie screen where they experience a zany, wild ride. Guests are then transported into the cartoon itself and aboard Goofy's train, which takes them on a wild adventure.

The ride features a new technology known as "2 and ​1/2 D" (3D without glasses) to give depth to the 2D environments, as well as more Hidden Mickeys than any existing ride.