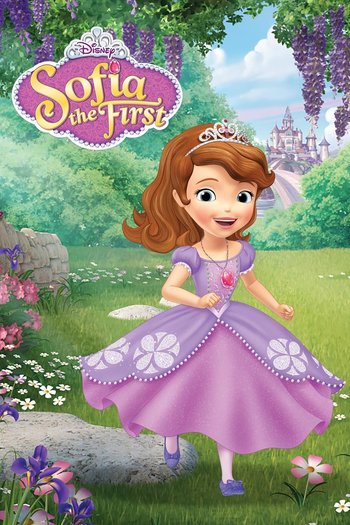 "It's gonna be my time to show them all that I'm Sofia the First!"
"It's your time to shine, Sofia."
Advertisement:

Sofia the First is a Disney Junior original series that stars a new Disney princess. A pilot film aired during November 2012, followed by a television series that premiered on January 11, 2013.

It introduces Sofia, a little girl from the kingdom of Enchancia who lives a commoner's life until her mother marries the king, and suddenly she's royalty. With the help of three familiar fairies in charge of the Royal Prep Academy — Flora, Fauna and Merryweather and, on occasion, the Disney Princesses — Sofia learns that looking like a princess isn't all that hard, but behaving like one must come from the heart.

A major plot point of the show is Sofia possessing a powerful artifact, the Amulet of Avalor, which blesses its bearer incredible powers and abilities, and must never take it off and protect it from numerous villains who want to use it for their own purposes. Cedric, the bumbling castle sorcerer, secretly plots to use the amulet's magic to take over Enchancia, but always fails. Sofia never discovers his true nature until the final season premiere.

For the fourth and final season, the series shifted to a more sequential storyline featuring Sofia training to become Protector of her home world, while simultaneously working to protect dangerous artifacts called the Wicked Nine, which could carry a dark magic to free the most powerful villain ever lived.

In 2016, a new story in the same world, Elena of Avalor was announced. Sofia appears in Elena's prequel movie, and Elena is Disney's first Latina princess.

that the show would end the following month. The series finale aired on September 8, 2018, after a roughly 6 year/4 season run and almost 110 episodes.

Two Disney Tsum Tsum based on Sofia are available in the mobile game, regular Sofia and Horse Ridernote actually Sofia in her Protector attire Sofia, albeit as limited time offers and are exclusive to the Japanese version only.

Not to be confused with SOPHIA the Third.

A Tale of Two Teams

Princess Amber tries to convince the Dazzleball team she knows how to coach the game, none are buying it.

A Tale of Two Teams

Princess Amber tries to convince the Dazzleball team she knows how to coach the game, none are buying it.