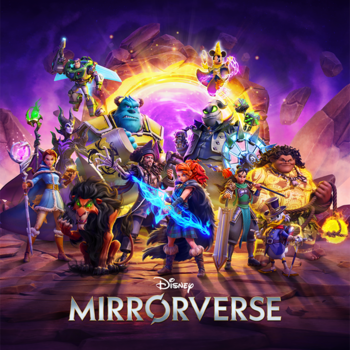 Disney Mirrorverse is a Disney crossover mobile Action RPG Gacha Game for iOS and Android devices, developed by Kabam. It was beta-released in the Philippines in April 2020, and while other countries were added to the beta, its full global release wasn't until June 23, 2022.

The Mirrorverse is said to have begun when stars of light and dark magic collided, creating worlds similar to those of Disney and Pixar but infused with powerful magic that enhances the abilities of its inhabitants. Here, Mickey Mouse discovered the Stellar Mirror, the source of all light magic. He eventually learned how to master its power and use it to travel between the worlds, allowing their heroes to form connections and friendships with one another.

But things changed when mysterious dark magic creatures appeared, with many of them taking the forms of the Mirrorverse's heroes and villains. Called the "Fractured" (after the way they shatter when defeated), they began attacking the worlds trying to claim the Stellar Mirror. Mickey calls on the friends he's made to defend the Mirror from the Fractured, and track down who is sending them and why.

In addition to some merchandise in the form of action figuresnote which first released in 2021, predating the global release and an artbook, some Tie-In Books have been announced to release in mid-2023: Pure of Heart, a novel featuring Snow White's origin as she first encounters the Fractured and the Guardians; and Belle, a manga starring the Beauty and the Beast heroine.