Western Animation / The Smurfs: The Legend of Smurfy Hollow 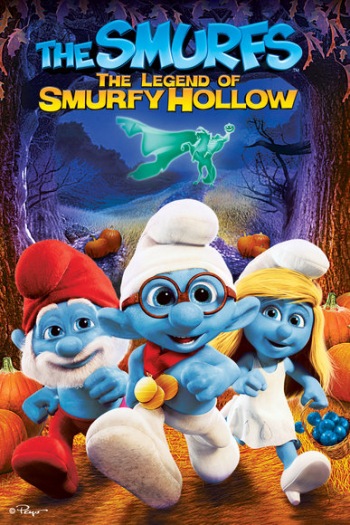 The Smurfs: The Legend of Smurfy Hollow is a 22-minute Halloween television special that is co-produced by Sony Pictures Animation and Duck Studios. It premiered on June 11, 2013 at the Annecy International Animated Film Festival, and is available as a bonus feature on The Smurfs 2 Blu-ray, as well as its own standalone DVD.
Advertisement:

When Brainy Smurf is favored to win the annual Smurfberry Hunt for the ninth year in a row, Gutsy Smurf sets out to discover how Brainy wins every year. Gutsy's investigation takes him into spooky Smurfy Hollow — and right into Gargamel’s trap! Can Brainy and Gutsy, with the help of Smurfette, put aside their rivalry before Gargamel captures them, or worse, will they come face-to-face with the legendary ghost, the Headless Horseman?

This animated feature provides examples of