Book on the Head 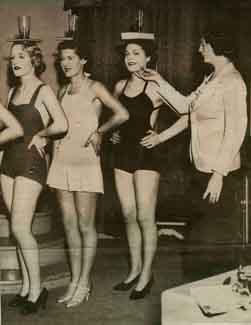 Glasses on books are optional.
"I don't get it. Do polite people not have bookshelves in your country?"
— Candace, Phineas and Ferb
Advertisement:

The main exercise in just about every poise class: learning to walk with a book on your head without letting it fall. It helps with standing up straight, the basis to earn respect in high class society. Rich men are expected to not slouch, either; but curiously, it's mostly women who are shown training with books in fiction.

Maybe because of the association with beauty pageants, whose contestants always work their walking and general attitude before arriving on the podium. It's also common in finishing schools.

The other context where the book-on-head training is seen, is when a Fish out of Water has to learn high society manners, whether she just legally won her entry in or she is working undercover, impersonating a rich protagonist.

The main character will either do it perfectly, confirming she is where she's meant to be, by managing to carry more than one book, or curtsying and descending stairs while still having it on the head. Or else, her rival will manage to do so while the heroine will fail miserably, confirming she doesn't fit in.

A common variant consists of using another object, like a vase, or, adding difficulty, by putting a fragile thing (such as the aforementioned vase) on the book, or increasing the number of the objects carried on the head.

Compare Throw the Book at Them for the other meaning of "book on head".