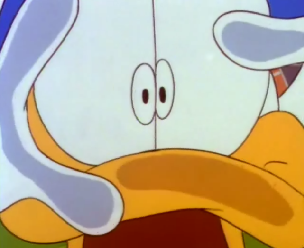 Why are you just sitting there reading TV Tropes? Don't you know that this page is all about breaking the fourth wall?note What do you mean I'm too close?

Huey: In all this time fixing the room, have you noticed it only has three walls?
Scrooge: Oh, don't be daft, lad. Of course there's a fourth wall.
Huey: Oh, really? Have you actually looked at it?
[they stare at the fourth wall and see the in-universe audience]
Della: Okay, that is a little weird.