Literature / The School for Good and Evil 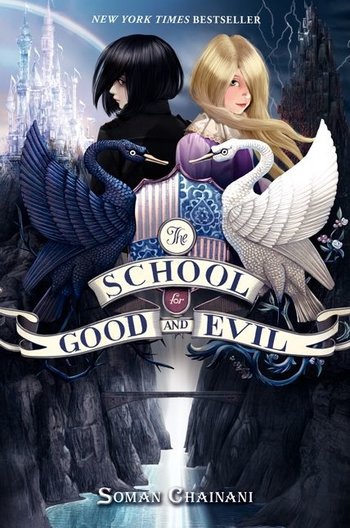 Appearances Can Be Deceiving: The Series
In the forest primeval
A school for good and evil
Two towers like twin heads
One for the pure
One for the wicked
Try to escape you'll always fail
The only way out is
Through a fairy tale
Advertisement:

The School for Good and Evil is a children's fantasy novel series by Soman Chainani.

Every four years, two children from the small village of Galvadon are kidnapped by a shadowy figure known only as the "School Master". There isn't any pattern regarding gender or age, but one child will always be beautiful and kind, the other ugly and foul-tempered. Furthermore, the likenesses of past children have appeared in the fairy tale stories mysteriously delivered to Galvadon's only bookstore. From these observations is birthed the Storybook Theory: the abducted children are sent to a school where they are taught how to be heroes or villains.

Sophie is an ardent believer in the Theory. Thoroughly bored with Gavaldon, she dreams of being captured and becoming a fairy tale princess. To this end, she's meticulous about her appearance and endeavors to do at least one good deed a day. One such good deed was befriending the village outcast's daughter Agatha, who is her opposite in every way: ugly, anti-social, and unimpressed with the Storybook Theory and any who believe in it.

Her tune quickly changes when the School Master takes both her and Sophie to the mythical School for Good and Evil. However, they both receive the shock of their lives when Sophie gets dropped on the Evil side and Agatha on the Good. They each believe there's been some mistake, but their attempts at convincing the school's staff go unheard.

Getting out of this situation will prove difficult in more ways than one: a rift slowly forms between the two friends, one that may determine the outcome of this fairy tale.

The books included in this series are:

Shortly after the release of the first book, Universal Pictures announced plans to create a series of films based on the novels, with Joe Roth and Jane Startz serving as one of the main producers. Netflix eventually acquired the film rights in 2020 with Paul Feig taking the helm as director and co-producer. In December of that same year, Sofia Wylie and Sophia Anne Caruso were cast in the lead roles of Agatha and Sophie, respectively. The film released on October 19, 2022.