Film / Snow White and the Huntsman 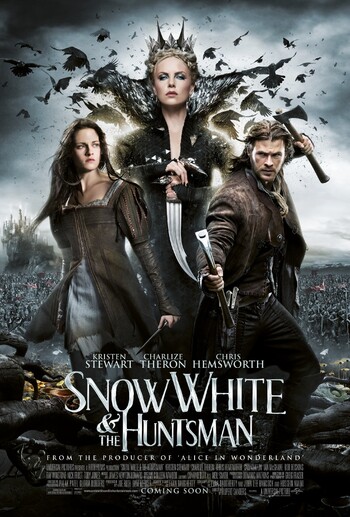 "We have rested long enough. Frost to fire and fire to frost. Iron will melt. But it will writhe inside of itself!"
"Be warned, her innocence and purity is all that can destroy you. But she is also your salvation, queen. Take her heart in your hand and you shall never again need to consume youth. You shall never again weaken or age."
— Mirror Man
Advertisement:

Snow White and the Huntsman is an action fantasy film based on the Snow White fairytale. It was released in 2012, the same year as another Snow White retelling, Mirror, Mirror. Where that film recasts the story as a more light-hearted adventure, this is a darker telling.

In a land ruled by tyranny, the vain and selfish Queen Ravenna (Charlize Theron) learns that her stepdaughter, Snow White (Kristen Stewart), is destined to surpass her not only as the "Fairest One of All" but also as the kingdom's future ruler. But then the Queen learns from her Magic Mirror that the only way to remain in power is to consume Snow White's heart and achieve immortality. Snow White escapes into the Dark Forest and Ravenna recruits the Huntsman Eric (Chris Hemsworth) to find and kill Snow White. Eric, however, takes pity on the young princess and teaches Snow White the art of war. Now, with the aid of eight dwarves (played by among others Ian McShane, Ray Winstone, Nick Frost and [in his final film] Bob Hoskins) and the duke's son William (Sam Claflin), Snow White begins a rebellion to bring down her stepmother once and for all.

The Huntsman: Winter's War, which serves as both prequel and sequel, was directed by Cedric Nicolas-Troyan (who served as a visual effects supervisor on the first movie) and stars Hemsworth and Theron joined by Emily Blunt and Jessica Chastain. It was released in North America on April 22, 2016.

Snow White and the Huntsman contains examples of: