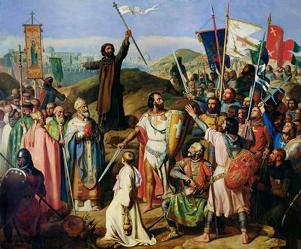 Deus vult!Translation God wills it!
"Caedite eos. Novit enim Dominus qui sunt eius."Translation "Kill them. For the Lord knows those that are His own."
— Arnaud Amalricnote He, allegedly, said this about differentiating faithful Catholics from the Cathar Heretics in Southern France, during the Albigensian Crusade.
Advertisement:

The Crusades were a series of military campaigns that took place between the 11th and 13th centuries, most famously against the Muslims, or Saracens, to reconquer the Holy Land (modern-day Lebanon, Israel and a part of Syria, more or less), but it also included other conflicts, such as the campaigns against the Moors in Spain as well as pagans in the Baltics, and the Albigensian heretics. The word "Crusade" is a coinage from a later era. During the era, the expeditions were described as iter or peregrenatio which means "pilgrimage". The warriors going to the Holy Land saw their duty as essentially religious in nature, a holy quest to a holy place, defeating and crushing heathens and heretics, earning glory in earth and a place in heaven. The word "Crusade" comes from croisade which referred to the practice of stitching a cross on garments, a heraldic practice which metaphorically certainly fits the era. Arab historians of the medieval era simply called it "the Frankish Wars", while modern historians returning to the Crusades after their experience with colonialism and Arab nationalism, also call it Crusades (or "campaigns of the cross" or ḥamalāt ṣalībiyya with the word ṣalībiyyūn used to describe Crusaders and Westerners in general).

The immediate cause was the petition from the Eastern Roman Emperor Alexios I to Pope Urban II. Alexios' request was a somewhat delayed response to the Battle of Manzikert in 1071 and to the ongoing campaigns of Norman lords based in southern Italy against Constantinople's holdings in the Balkans. Manzikert was symptomatic of the Byzantines' major problem to the East—- the arrival and rise of the Turks, who had upset the balance of power that had existed between the Empire and the Arabs for over 200 years. The Normans for their part were to the Byzantines emblematic of Catholic Christendom's small-mindedness and stupidity — attacking the only thing keeping the ascendant Turks from rampaging all over a completely unprepared Europe. The Emperor (or someone in his court) conceived an idea: Why not turn these bloodthirsty, land-hungry Normans (and their equally uncouth Catholic friends) against the Turks? Hence the letter to the Pope, who in turn considered all sorts of angles to convince the Normans—whom he also disliked, since the Normans had kidnapped his predecessor and were generally wreaking havoc in Italy as well — to fight the Turks. Eventually, the Pope got windnote According to tradition, from a fanatical fellow named Peter the Hermit. of a Turkish provocation to all Christendom—the Turks had just (re)taken Jerusalem from the Fatimids, and being a more itchily pious lot than the Fatimids, they tended to treat Christian pilgrims to Jerusalem poorly (as opposed to the Fatimids, who were more like "as long as you keep the gold flowing, we don't care what you do").note The Christians also remembered the destruction of the Church of the Holy Sepulchre, but that had happened about a hundred years before the First Crusade and was the order of the Fatimid "Mad Caliph" Al-Hakim bi-Amr Allah, who had this whole thing about religious minorities—and majorities, since he, an Ismaili Shiite, persecuted his empire's Sunni majority as well—and particularly hated Christians (possibly because his mother was Christian). Al-Hakim's sane son granted Christians permission to rebuild the church, which the Seljuk Turks respected when they took Jerusalem. Didn't matter though: the Westerners couldn't be bothered to distinguish between Sunni and Shiite, Arab and Turk, or "Mad Caliph" and sane Sultan until years after they got to the region. This gave the Pope an idea: sell this war as a kind of armed pilgrimage, with the holy aim of "bringing the Cross to Jerusalem." After all, "Bring the Cross to Jerusalem" is a much better slogan than "Save the Greek Empire".

These wars and their associated events had a powerful and lasting effect, despite the fact that the Crusaders left the Levant by the fourteenth century. The Western Catholics, who already had something of a taste for Eastern luxuries, got even more of a taste for them after living in the East for a while—and the Italians, who ferried them between Western Europe and the Levant, got massive experience in sailing (which helped in the 15th century craze for exploration, and we all know where that led) and Middle Eastern trade contacts up the wazoo (which gave the Italian city-states the means to fund The Renaissance once The Black Death was over).note One of the main sources of funding for the Renaissance was money from the trade with Egypt, which turned extremely lucrative in the late 14th century on account of Mansa Musa

's complete misinformation respecting the price of goods in Cairo. The Italian trade with Egypt was in large part a byproduct of the Crusades. The Crusades also led to the development of Catholic "just war" theory, and reintroduced the idea of a Church Militant to the West—which promptly turned it on the East, when The Teutonic Knights went and conquered/converted the Baltic (giving the side effect of completing the Christianization of Europe).note Well, except for Muslim Spain. The Muslim world, which had long been locked in a period of infighting, got something to unite it; the end result was larger, stronger Muslim states, and—with Saladin's conquest of the Fatimid Empire—the end of Shiism as a significant political force for the next three hundred years (when the Safavids converted Iran under Ismail I). And as for Byzantium—well, scroll down to see what the Fourth Crusade did to them.

Naturally, the movement extended to a much bigger and more complex set of conflicts and there would be several other crusades being called in the following centuries. Although religious fervor was certainly a big factor, the motives, progress, and effects of the various Crusades are deeper and more various than most people think, so perhaps you are better off reading The Other Wiki (among other places) if you want to know more. Nevertheless, here is an overview of the more important crusades―the first through the fifth, which had the approval and blessing of the then reigning Popes, to get you started.

Some of the later "Crusades"

Works dealing with, or set in the era of the Crusades: