Film / The Incredible Army of Brancaleone 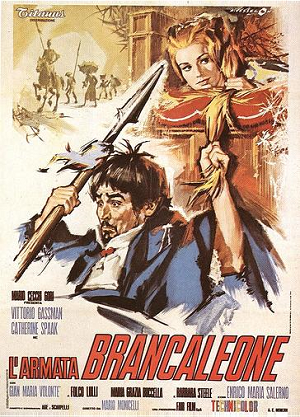 L'Armata Brancaleone, known to English-speakers as The Incredible Army of Brancaleone and For Love and Gold is an Italian comedy movie released in 1966, written by the famous duo Age & Scarpelli and directed by Mario Monicelli. It features Vittorio Gassman in the main role. It was entered into the 1966 Cannes Film Festival.

The film is set in the tragically realistic Italy during the Middle Ages. After mugging a valiant but wounded German Knight, some raiders find out that he was going to inherit the fief of Aurocastro. The bandits manage to persuade the fallen knight Brancaleone of Norcia to go to the fief in lieu of the German Knight and take possession of it, sharing the goods with the others, of course. So the Ragtag Bunch of Misfits (or Armata Brancaleone) start its long journey towards the fief, meeting up with various characters on their way, including a princess, a fanatical priest who want to force them to join the crusade, a fallen byzantine prince and many others.

The film was a great success and soon became extremely popular, so much that the term "Armata Brancaleone" has become a canon sinonym for, well, Ragtag Bunch of Misfits.

A sequel, called Brancaleone alle Crociate (Brancaleone at the Crusades) was filmed in 1970 and met with some success as well. This time, Brancaleone along with a ragtag army of underdogs is going to embark on The Crusades, but his army is destroyed and because of his long tongue he gets involved in a deal with The Grim Reaper: he'll have "8 moons" of time to find a worthy end. Furthermore he stumble across Filderico, the infant child of the Sicilian King Boemondo, and decides to bring him back to his father to savety. Along with a renewed, improbable gang he start his quest towards the Holy Land.

The first film contains examples of:

The second film contains examples of: