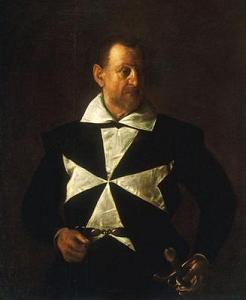 That lord i' th' black cloak, with the silver cross, is Knight of Rhodes...
Caspar Gutman: What do you know, sir, about the Order of the Hospital of Saint John of Jerusalem, later known as the Knights of Rhodes and other things?
Sam Spade: Crusaders or something, weren't they?
— The Maltese Falcon
Advertisement:

The Sovereign Military Hospitaller Order of Saint John of Jerusalem of Rhodes and of Malta (SMOM), known also as The Knights Hospitallers, the Knights of St. John, the Knights of Rhodes, the Knights of Malta, and about a dozen variations thereon, is a Roman Catholic religious order and the oldest and perhaps most important of the three great orders of crusading knights, the other two being The Knights Templar and The Teutonic Knights.

The birth of the Order dates back to around 1048. Merchants from the ancient Marine Republic of Amalfi obtained from the Caliph of Egypt the authorization to build a church, convent, and hospital in Jerusalem to care for pilgrims. The Order of St. John of Jerusalem — the monastic community that ran the hospital for the pilgrims in the Holy Land — became independent under the guidance of its founder, Blessed Gérard. With the Bull of 15 February 1113, Pope Paschal II approved the foundation of the Hospital and placed it under the ægis of the Holy See, granting it the right to freely elect its superiors without interference from other secular or religious authorities. By virtue of the Papal Bull, the Hospital became an Order exempt from all Church authority except for the pope's, and paid no tithes. All the Knights were religious, bound by the three monastic vows of poverty, chastity and obedience. Early on the habit of the order was red with a white cross, changed later on to the more well-known black cloak and white cross, which by the thirteenth century had assumed the eight-pointed form familiar today as the Maltese Cross.

The constitution of the Kingdom of Jerusalem regarding The Crusades obliged the Order to take on the military defense of the sick, the pilgrims and the territories that the crusaders had conquered from the Muslims. The Order thus added military operations to its hospitaller mission.

When the last Christian stronghold in the Holy Land fell in 1291, the Order settled first in Cyprus and then, in 1310, led by Grand Master Foulques de Villaret, on the island of Rhodes. The military role of the Order shifted from land-based to naval-based operations in the Mediterranean, serving as a sort of Catholic Coast Guard against both Muslim navies and pirates and sometimes engaging in something very similar to piracy against Muslims themselves. They'd cease their operations on Anatolia after being driven out by the Mongol-Turkic warlord Timur the Lame when he besieged their fortress in Smyrna.

In 1523, after six months of siege and fierce combat against the fleet and army of Sultan Suleiman the Magnificent, the Knights were forced to surrender and abandon Rhodes. The Order remained without a territory of its own until 1530, when Grand Master Philippe de Villiers de l'Isle Adam took possession of the island of Malta, granted to the Order by Emperor Charles V with the approval of Pope Clement VII. In 1565 the Knights, led by Grand Master Jean de la Vallette (after whom the capital of Malta, Valletta, was named), defended the island for more than three months during the Great Siege

by the Turks. In 1571, the fleet of the Order, then one of the most powerful in the Mediterranean, contributed to the ultimate destruction of the Ottoman naval power in the Battle of Lepanto.

Two hundred years later, in 1798, Napoléon Bonaparte occupied the island for its strategic value during his Egyptian campaign. Because of the Order's Rule prohibiting them from raising weapons against other Christians, the knights were forced to leave Malta (ironically, the very anti-Christian sentiment of the Revolutionary French helped provoke a rebellion among the Maltese only two years afterwards). Although the sovereign rights of the Order in the island of Malta had been reaffirmed by the Treaty of Amiens (1802), the Order has never been able to return. After having temporarily resided in Messina, Catania and Ferrara, in 1834 the Order settled definitively in Rome. In the 20th century the original Hospitaller mission became once again the main activity of the Order and lives on today as the Sovereign Order of Malta

Curiously, the Order is treated as an nation of its own right with their own monarch (their Grand Master also doubles as a Prince), passports, currency, diplomats, military and air force, is recognized by more than a hundred countries (most of them belong to the Catholic world) and has an observant status in the United Nations, but they control no country of their own - unlike what their name indicates, they have no sovereignty over Malta, which is an separate independent republic. Their only possessions are two buildings in Rome which enjoys extraterritoriality status and an fort that was temporarily granted by the Republic of Malta in an 2001 agreement, which will expire in a century though the Maltese are allowed to terminate it at any time after 50 years have passed in 2051.

It should be noted that there are various Protestant honorary societies, such as the German and Dutch Johanniterorden and the English Venerable Order of St. John, that claim descent from the original Roman Catholic military order.note The German and Dutch groups splintered directly from the Order of Malta at the time of the Reformation and have continued ever since, while the British group has a more tenuous origin, having been originally founded in the early nineteenth century as part of an effort to raise cash for Greek nationalist rebels against the Ottoman Empire These groups served largely as honors for the nobility of their respective countries, but have also performed important charitable works, such as the well-known St. John Ambulance service.

In popular culture, the Knights Hospitallers are much less used than their brother orders, the Templars and The Teutonic Knights. They tend to be used more as local color, their distinctive habits adding a note of pageantry to a historical setting (as, for example, in John Webster's The White Devil, whence the picture quote). When they do appear, they are apt to appear as gentler, more likable figures than those other knights, perhaps because of the emphasis on their hospitaller function, or possibly because they never alienated powerful secular figures, as the Templars did the King of France and the Teutonic Knights the King of Poland (incidentally, a great many Templars who survived that organization's destruction promptly joined the Hospitallers, because...well, what else is a Warrior Monk with no order of his own going to do?). Interestingly, there are a surprising number of extremely fine paintings of Knights of Malta by distinguished artists such as Titian and Caravaggio (who was himself for a brief time a member of the Order).

Tropes Associated With The Knights Hospitallers:

Works associated with the Knights Hospitallers: