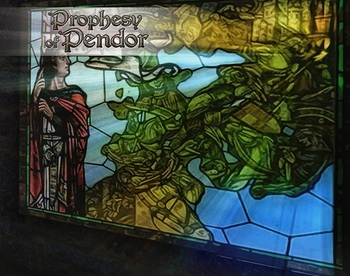 Pendor, a land once ruled by a powerful empire is now divided into five kingdoms which are in a perpetual state of war with each other. To make matters worse, evil cults roam the land kidnapping people and committing human sacrifices for their evil gods in an attempt to bring their gods into human world once again. However all hope is not lost. Legends tell of a hero who will rise one day, unify the land and bring peace back to Pendor. You are a traveler from the land of Barclay who for one reason or another has recently arrived into Pendor and you just happen to be the hero that Pendor is looking for. You get a vision from a goddess telling you to unify the land and befriend the Noldor elves to the east, beginning your quest to become the ruler of Pendor.
Advertisement:

Prophesy of Pendor is a fantasy total conversion mod for Mount & Blade Warband. What makes it distinct from most other Mount & Blade mods is its highly detailed original low fantasy setting, rather than one based on an alternative take on Calradia, a historical period or another work of fiction. In addition the mod adds a plethora of new features and tweaks into the game to improve the experience and make it more challenging. Probably the most notable of these new features is the Knighthood Order system, which allows the player to join and fight for one of the many Knighthood Orders found in the setting, or even found their own one and in exchange receive powerful Knighthood troops that you can deploy on the battlefield. The mod is currently at version 3.9.5 and can be downloaded from ModDB, Nexus Mods or Steam Workshop.

Tropes used in this modification include: