The Republic of Malta (Maltese: Repubblika ta' Malta), is a small Southern European island nation, located about 60 miles off the coast of Italy and consisting of the inhabited islands of Malta, Gozo and Comino and a number of uninhabited islands. Malta has historically been of enormous strategic significance. The Knights of St. John were resettled here after their original base of Rhodes was over-run by the Ottoman Turks.

During World War II, Malta was a British possession (following wars with France a century earlier) and a very useful air and naval base just off the enemy (Italian) coast. The Italian and German air forces made determined attempts to do something about this, but were held off by a bare minimum of British fighters. The people of Malta were considered to have conducted themselves so bravely during the bombardment that the entire nation was collectively awarded the George Cross (Britain's highest civilian award for bravery). Britain later considered integrating the island into the UK, but in the end it became an independent republic.

The Maltese language sounds very odd to English-speakers, being an Afro-Asiatic language like Berber, Hebrew and Arabic rather than an Indo-European one and something of a cross between Arabic and Italian. It is thought that it is descended from the form of Arabic spoken by Arab traders in Sicily during the Middle Ages. Its closest relative is Tunisian Arabic; a Tunisian who knows Italian or an Italian who speaks Tunisian Arabic should be able to get by.

When in Malta, it is worth being prepared.

Historically, Malta is known for its pre-historic temples and the ancient worship of the 'Fat Lady'. Over the ages the island exchanged hands, being ruled by Romans, Arabs, Knights of St. John, French, British and finally in modern times, the locals. Under the Knights the island held its ground against a massive armada of the Ottoman Empire, and made quite a show during the Great Siege of Malta.

Despite all of this, Malta's climate (in spring and autumn, at any rate), and the fact that most of its inhabitants speak at least some English, make it a popular holiday destination with Britons.

Popeye was filmed here; the main set that portrayed the town of Sweethaven still exists as "Popeye Village", a museum and entertainment complex.

Final Justice was also filmed and set here. An episode of Agents of S.H.I.E.L.D. was supposedly set here, but bizarrely and insultingly depicted the country as an isolated developing-world rogue state whose government was in the pocket of a millionaire Diabolical Mastermind. Michael Bay's 13 Hours: The Secret Soldiers of Benghazi was also filmed here as a stand-in for Benghazi, Libya due to the area having a lot of Northern Africa-style architecture and also being a lot safer than Libya itself. Valletta also served as stand-in for late 15th century Spanish cities Granada and Séville in Assassin's Creed.

XTC's Andy Partridge was born in Malta, although he and the band are more commonly associated with Swindon.

See also Maltese Media for works from this country. 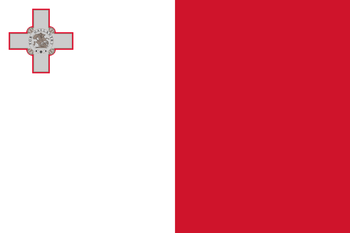 Red and white are traditional colors used by The Knights Hospitallers; at the canton is the George Cross

, Britain's highest award for civilian gallantry (as well as military personnel engaged in non-military operations), conferred upon the entire nation by the system's founder, King George VI, to honor its heroic stand during World War II, showing a Greek cross, at the center of which is a medallion showing Saint George, patron of England, slaying a dragon, surrounded by a ring which reads "For Gallantry".
Coat of arms of Malta 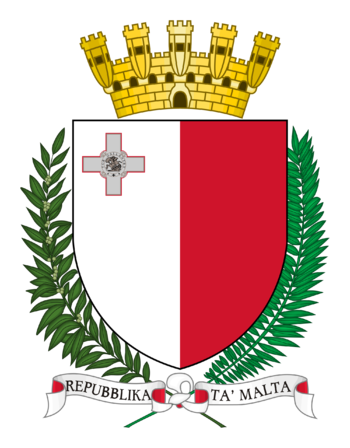 Guard, Lord, forever, as you've done erst and ceasing never,
This land whose name we received, our motherly-named Mother.
Her you have draped with a light whose grace exceeds all other.
On those who govern, sovereign God, bestow understanding,
Grant wellness to those who work, largesse to those employing,
Make firm, make just all our bonds, the peace we are enjoying.
Government Miscellaneous