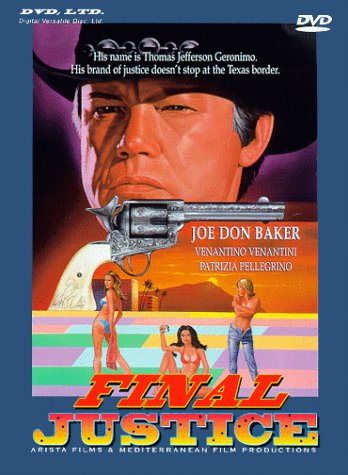 "The story of a large sweaty man who goes to Malta to sweat."
— Satellite News

One dark and stormy night, Palermo and his brother Tony, two mob hitmen, are blundering around south Texas trying to get across the border to escape the heat from their last job in Dallas. They end up gratuitously shooting a motorist they crash into; then, needing wheels, they decide to try hotwiring a police car in front of a police station. Of course, they're discovered, but they manage to kill the sheriff of the town. His deputy sheriff, Thomas Jefferson Geronimo III, chases them all the way to and across the Mexican border, where he kills the younger mobster for trying to pull a gun. Palermo, outraged at his brother's death, swears vengeance on Geronimo, but refuses to rise to the challenge of a showdown; instead, Geronimo just knocks Palermo out and drags him back.

Well, for some reason Geronimo is asked to escort Palermo back to Sicily as a publicity stunt. Of course, this is all part of an Evil Plan, as the mafia's already arranged to fake a malfunction on their flight that requires an emergency landing, bringing Geronimo and Palermo to Malta instead. There, operatives are ready to help Palermo get free. The Maltese police, led by Superindendent Mifsud, are adamant that Geronimo stay out of the case and let them handle it, as he is well out of his jurisdiction. But neither Geronimo nor Palermo are willing to just let it end like this...

The rest of the movie is essentially repeating the same sequences over and over.

Rinse and repeat until Geronimo finally gets his man and the credits roll.