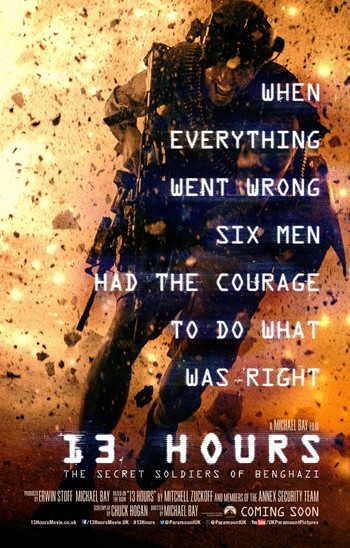 Libya recently toppled an oppressive dictator and dozens of militia groups formed in the aftermath, with heavy weaponry wandering the streets after raiding the now open armories. A makeshift US embassy in Benghazi, officially only known as a Diplomatic Compound, remained the only political camp in the city and one of only two in the country. A mile from the Compound is a CIA Annex where agents work to organize the country and bring it under democratic rule. Providing security for the Annex is members of a group called the Global Response Staff or G.R.S., who are ex-military and their primary job involve being bodyguards.

On the night of September 11, 2012, days after noted US Ambassador Christopher Stevens came to the country, the Compound came under attack by a local militia, quickly overwhelming the local guards and understaffed security inside. The G.R.S. team are antsy to assist but they are technically not supposed to get involved, but after several false starts make their way to rescue survivors and bring them back to the Annex. Knowing the militia feel victorious over the Compound attack, they prepare for further assaults until they get reinforcements.

Tropes Used by the film: