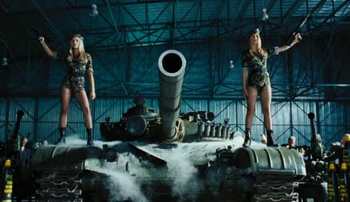 "Do you come with the tank?" "Oh, you!"
Advertisement:

While it has obviously occurred in fiction, having a Hood Ornament Hottie in skimpy camo holding a large machine gun sounds too much like self-parody for any real company to actually do it, regardless of what occurs at E3.