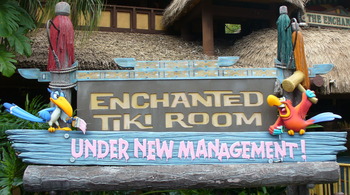 Make way, Tiki Birds, for Zazu and Iago are taking over the show!
Advertisement:

Under New Management refers to a permanent change in management — or at least long enough for a full story arc. When the boss being replaced is back by the end of the episode it's a 10-Minute Retirement.

This is not The Protagonist being thrust into a recently vacated position and suddenly finding himself in charge of an organization while he's still learning the ropes. That's You Are in Command Now.

Often associated with We Don't Suck Anymore, They Changed It, Now It Sucks! and Nothing Is the Same Anymore. If done badly can lead to Meet the New Boss.