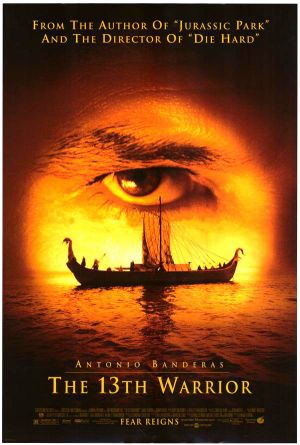 The 13th Warrior is a 1999 Action/Adventure film directed by John McTiernan, based on the book The Eaters of the Dead by Michael Crichton, who also directed parts of the film.

Ahmad ibn Fadlan (Antonio Banderas) is an educated Arab courtier who is sent to foreign lands as punishment for a courtly indiscretion. He is recruited to serve as the thirteenth member of a group of Norse warriors who answer a call for help from a far-away Nordic king. Said king's kingdom is under attack from the Wendol, a savage tribe of bear pelt-wearing cannibals. The bookish Fadlan narrates his adventure and his growing respect for the barbarians around him throughout.

The story is a reworking of the classical tale of Beowulf, with Norse chieftain Buliwyf as an Expy for the hero Beowulf and the remaining warriors form his band. The classic battles are all reworked to replace the monsters with the cannibalistic Wendol, and the whole thing ended up looking pretty close to Seven Samurai, only with Vikings and an Arab traveler. Speaking of which, Fadlan is based on the Real Life figure of the same name

. The book draws heavily on Fadlan's writings in its opening passages.

The film had a notoriously difficult production, and suffered heavily from Executive Meddling. Crichton himself ended up performing some reshoots after test screenings, such as making the tribe's queen into a lithe Dark Action Girl. For the release of the film, some printings renamed the book after the film, with the note "Originally Published As 'Eaters of the Dead'".