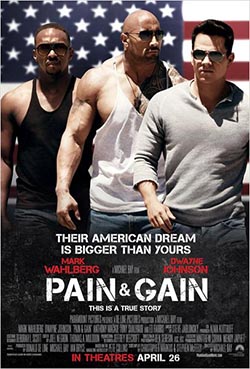 And they screw their dream over even bigger than you ever could.
"My name is Daniel Lugo, and I believe in fitness."
Advertisement:

Pain & Gain is a dark comedy based on a series of 1999 Miami New Times articles by Pete Collins about "a couple of Florida steroid-abusing knucklehead bodybuilders who become criminals involved in an extortion ring and a kidnapping plot that goes horribly awry." It stars Mark Wahlberg as Daniel Lugo, Dwayne Johnson as Paul Doyle, and Anthony Mackie as Adrian Doorbal, and is directed by Michael Bay.

Daniel is a mainstay of the Miami personal fitness community, very proud of what he does but he has to work hard to make a living. Seeing a wealthy client of his, Victor Kershaw (Tony Shalhoub), and knowing some of the underhanded tricks he pulled to gain his fortune, Daniel begins a plan to steal his money and brings in friends Adrian and Paul to help him accomplish it. They prove themselves wholly incompetent, as even though they get Kershaw's money they were unable to kill him and his story is so outrageous the police don't give him a second thought.

The "Sun Gym Gang" celebrates their new wealth but Kershaw sends in a private investigator Ed Du Bois (Ed Harris) to track down their methods and soon after law enforcement follows.