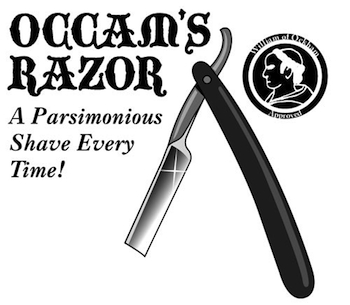 "When I see a crop circle, I could hypothesize a conspiracy of local farmboys who spent a whole night in a field trampling crops down with primitive earthling tools. But a much simpler hypothesis would be a fellow alien with a crop-writer who wanted to contact a ship in orbit. Hitchhikers do this all the time."
— No Edge 2: The Curvature of the Universe

by our good friends at RationalWiki) is an epistemological razor (a logical principle that is used in deductive reasoning to evaluate theories). It is named for the 14th-century Franciscan friar and scholastic philosopher William of Ockham, who was a particularly assiduous applier and proponent of the Law of Parsimony, although by no means the first to describe or postulate it. Occam's Razor is often paraphrased, "The simplest explanation is the best one."

Unfortunately, this can lead to misunderstandings, at least so far as what is meant by "simplest." The actual principle is, "Entities must not be multiplied beyond necessity." The best explanation is the one which makes the fewest assumptions and explains all the data. This means a highly complex answer may actually be the better one if an alternative, deceptively simpler answer fails on one or both counts (it may be easier to understand but requires unproven assumptions, or it fails to explain all the data). Also important to remember is that an explanation that previously accounted for all the data may fail to do so in the future when new data appears, and so requires refinement or even replacement.

Most theories have a foundation of underlying premises (the aforementioned "entities"), all of which need to be true for the theory itself to be true. Occam's Razor suggests, all else being equal, believing the theory with the fewest underlying premises. When one really starts looking under stones, one can find an apparently simple explanation is actually underpinned by a whole host of assumptions that at first glance had gone unnoticed.

Example: There have been theories that Ancient Astronauts built the Egyptian Pyramids instead of humans. For this to be true, we'd need the following givens:

The more normal theory only requires that:

You can probably guess which theory Occam would agree with, and why.

In short, when trying to examine an incident to figure out why it happened, a simple answer involving the commonplace and reasonable is more likely to be correct. (Note: more likely, not always.) In other words, when you hear hoofbeats, think horses, not zebras.

Occam's Razor is the bane of Conspiracy Theorists everywhere since conspiracy theories usually rest on a lot of shaky assumptions. For example, take the Apollo Moon Landings, which many believe was a hoax. At its base, the conspiracy claims that the United States was not technologically able to send a man to the Moon, and so had to fake it. However, when you really get into what would be necessary for such a conspiracy to be accomplished, you realize it'd actually be simpler and easier to just send people to the Moon. (That Mitchell and Webb Look has a brilliant series of sketches on this idea, including the moon landing

As mentioned above, the Razor requires that all the data is accounted for. Newtonian physics are simpler than modern theories and were sufficient to take a man to the Moon, but Sir Isaac simply could not explain all the new data collected after him — most of which was completely unknown when Principia Mathematica was published. This required another smart man — namely, Albert Einstein — to formulate more complex theories, particularly "Relativity." Einstein explicitly made this point himself when he said that ideas should be kept as simple as possible, and not simpler. It should be noted that Newton's theories weren't simply thrown in the trash. While Einstein's theories are concerned mainly with objects traveling at relativistic speeds and objects with extreme mass (such as black holes), Newton's theories are still used for macroscopic bodies so long as the mass and speed are not too big.

Another very common mistake is to summon up the Razor in a debate in order to add weight to a particular argument. Occam's Razor is a mental guide — nothing more — and cannot by itself be used to validate or invalidate any particular theory. This usage is entirely fallacious, as the Razor does nothing more than recommend searching for hypotheses that make the fewest new assumptions and explain all the data. It is not a magical baton that points to the right answer. Applying it in this way inevitably leads to a frankly embarrassing race to the bottom over whose theory is "simplest."

The inverse of this is Arkham's Razor, where the most bizarre solution is most likely to be the correct one. See also Hanlon's Razor, where events attributed to malicious intent are more easily explained as the result of someone's stupidity.