Tails: I just wouldn't try the night vision option right now. You might go blind.
Cosmo: Well, at least my last sight would be a beautiful one. 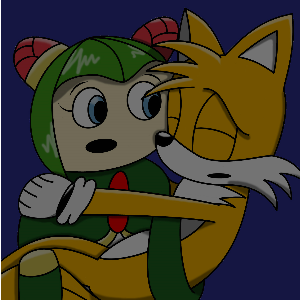 , based on the Sonic the Hedgehog series.

Cosmo and her sisters were watching a meteor shower one night when strange plane crashed nearby. When they discover that the pilot is two-tailed fox boy, Cosmo feels an instinctive need to help and protect him.

The series is based on the idea that Cosmo and Tails were of such similar temperaments and philosophies that even if their gender roles were reversed, nothing about their relationship would change. The series also theorizes what Seedrian society and physiology may have been like if they didn't all blow up in their first episode. It can be found on Dr-InSean's deviantART