All spoilers for the previous films will be unmarked. 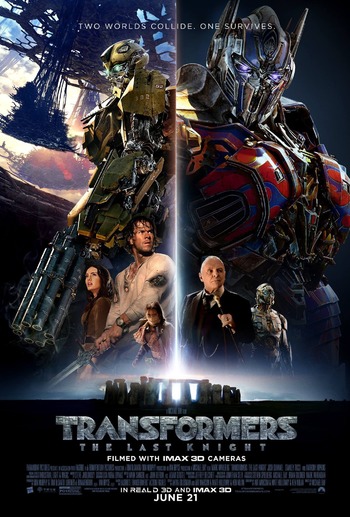 Rethink your heroes.
"One hundred billion trillion planets in the cosmos. You want to know, don't you, why they keep coming here?"
— Sir Edmund Burton
Advertisement:

Transformers: The Last Knight is the fifth entry in the Transformers Film Series and the sequel to Transformers: Age of Extinction. Michael Bay serves as director once again for the fifth consecutive time, and the film was released on June 21, 2017.

It's been several years since Optimus Prime left Earth to search for the Creators of the Transformers race. In his absence, the situation on Earth has barely improved; Transformers have been declared illegal and are hunted down to be killed or incarcerated by the paramilitary unit the Transformers Reaction Force. Cade Yeager currently hides out in an old junkyard with Bumblebee, Hound, Crosshairs, Drift, and several other Autobots, rescuing any newly arrived Autobots they can find. However, during one such mission, Cade finds himself bestowed with a mysterious talisman - one that heralds the arrival of a titanic threat's approach from deep space. Cade learns from an English lord that he and Viviane Wembly are destined to save the Earth from the approaching Cybertronian threat, but even this enemy is working to stymie a threat to Earth greater than any before...

Paramount Studios scrapped the direct sequel to the film originally set for 2019 due to The Last Knight's disappointing box office numbers which left the future of the series uncertain for three years. In 2020, Paramount announced the series will proceed starting with a sequel to Bumblebee, a live-action adaptation of Beast Wars and an animated prequel set on Cybertron is also in development.

When all seems lost, a few brave souls can save every trope we've ever known.

"At the heart of every legend, there is truth: a few brave souls unite to save their worlds. We can be heroes in our own lives—everyone of us—if we have the courage to try. Our fates were always intertwined, but now, our worlds are joined as one. We need to repair our planets, work together, if we wish to survive. A dangerous secret is buried deep inside the Earth. There is more to this planet than meets the eye. I am Optimus Prime, calling all Autobots: It is time...to come home."