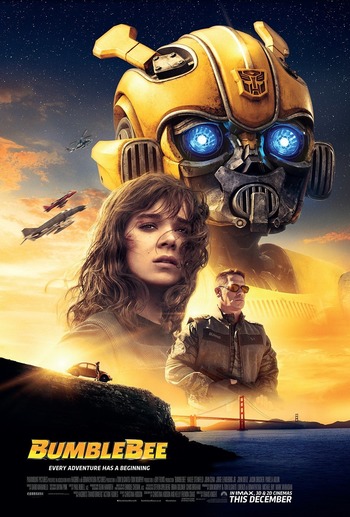 "This is how we stop them. You've got me, and I'm not going anywhere."
"Let me tell you somethin': a driver don't pick the car, nuh-uh... the car picks the driver. It's a mystical bond between man and machine."
— Bobby Bolivia, Transformers
Advertisement:

Bumblebee is a 2018 film based on the Transformers franchise. Written by Christina Hodson (Shut In, Unforgettable (2017), and Birds of Prey (2020)) and directed by Travis Knight (Kubo and the Two Strings) in his live-action directorial debut, it is the first Transformers live-action film not to be directed by Michael Bay; instead, he serves as executive producer. Peter Cullen and Grey Griffin reprise their roles as Autobots Optimus Prime and Arcee respectively from Bay's film series.

The story takes place in 1987, where Bumblebee (voiced briefly by Dylan O'Brien) takes refuge in a small California beach town junkyard, where a teenage girl named Charlie Watson (Hailee Steinfeld) befriends him. They are soon hunted by a government agency known as Sector Seven, led by Agent Burns (John Cena). As they run from society, Bee and Charlie learn that Bee isn't the only Transformer on Earth and that the others might not be as friendly.

The film was released on December 21st, 2018. Its TFwiki page tries to catalog new information as it is revealed.

An Optimus Prime-centered spinoff is now in the works.

Originally a prequel film in the Transformers Film Series, the future of the series came into question after the failure of Transformers: The Last Knight. However, despite a significantly lower budget, Bumblebee ended up being a critical and commercial success, so much so that at Toy Fair 2019, Hasbro

officially declared the movie the start of a "new storytelling universe", confirming its status as a Continuity Reboot, severing its ties to the earlier films. One such film, a sequel entitled Transformers: Rise of the Beasts, is set for a 2022 release, serving as a crossover with Beast Wars.

"You've got people out there who need you. This is why you're here, Bee."
Feedback

Charlie makes Bumblebee practice staying in car mode when people are around.

Charlie makes Bumblebee practice staying in car mode when people are around.