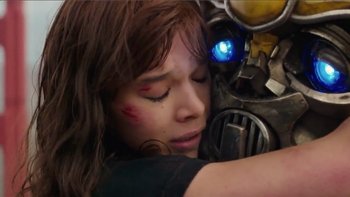 Goodbye Bumblebee.
Optimus Prime: Bumblebee, our war rages on! You must protect Earth and its people.
— Optimus Prime giving us a clear idea of what the movie's plot is.
Advertisement:

This is a recap page that explains the events of the Transformers film Bumblebee:

Deep in space, on the mechanical planet Cybertron, civil war is ablaze between it's natives: sentient robots that can convert into vehicles. The benevolent Autobots being led by Optimus Prime consisting of Ratchet, Arcee, Wheeljack, Ironhide, Brawn, Cliffjumper, B-127 and many foot soldiers are fighting a losing battle against the malevolent Decepticons, an imperialistic militarized robot organization consisting of Soundwave, Starscream, Shockwave, Ramjet, Thundercracker, Skywarp, Dirge and hundreds more. The Decepticons are victorious to the extent that they successfully infiltrate Iacon City after having destroyed the Autobots' capital. Optimus Prime orders a full retreat and decides to scatter the Autobots to different parts of the galaxy stating that he will stay behind to take down the Decepticons on his own. Yellow Autobot scout B-127, fighting his way through Decepticon troops to join the remaining Autobots, is concerned of this full retreat as leaving will allow the Decepticons full conquest of all of Cybertron. Optimus entrusts B-127 with a new mission, to travel to and station himself on the planet Earth, in order to establish a new base in hopes of finally gaining an advantage against their foes. He ensures his friend he'll join him, and as the other Autobots and B-127 board multiple escape pods and launch deep into space leaving Cybertron behind, Optimus leaps from the collapsing tower, as B-127 sadly watches.

On Earth, in the year 1987, a military group are carefully traversing the woods before their leader is caught in a snare trap and the opposing squad guns down the others. Revealed to be a training exercise with paintballs, commanding officer Jack Burns playfully chastises his partner Danny for his sloppy execution, adding injury to insult by constantly shooting him. Cutting him down as they go back and forth, Danny notices a flaming object falling fast and warns to take cover as the projectile makes explosive impact, sending soldiers flying. Requesting medical, Agent Burns angrily asks why mission control dropped napalm on them, only to notice a large, highly-advanced yellow robot rise from the smoking crater. Upon noticing several incoming jeeps as backup, the robot runs away. Believing it a threat, Burns orders the envoy to pursue the robot. A chase ensues as the robot, having scanned a nearby jeep, transforms into the very same model. Surprising Burns, he launches a harpoon cable at the robot, who gets loose but continues running in robot mode.

To escape, B-127 cuts down trees to block them off. Arriving at a mine site, he tears out the harpoon and makes a run for the mine, but is cut off by the envoy's jeeps and knocked over. Cornered and held at gunpoint by Burns and the soliders, B-127 shakily claims he means them no harm, but before he can explain himself further, a fighter jet roars above. Burns is confused that the Air Force was altered so early, B-127 recognizes what the jet really is and before he can warn them, the jet fires a payload that blows the site to hell and kills almost all the soldiers. The jet circles around and flies at the Autobot, revealing it to be the Decepticon solider Blitzwing, whp transforms into robot mode and rams and slams the scout into the mountainside. B-127 engages in battle with Blitzwing, but the Decepticon's size and viciousness easily overpowers him. Failing to stab him, the battle takes to the air, as the Autobot manages to damage Blitzwing's flight capabilities and slams him into the mountainside. On a cliff, Blitzwing fires at B-127 and seizes him, demanding the location of the Autobots. B-127 defiantly spits "I'll never talk!", to which Blitzwing rams a spike into his neck and brutally tears out his vocal processor, to "make it official", before dropping him off the cliff. Bumping against the rockside and taking critical damage as he tumbles back to the ground, Blitzwing prepares to execute him, deeming him a traitor to Cybertron. Thinking fast, B-127 jams one of Blitzwing's own missles into his chest and fires at him, blowing the Decepticon into charred scrap metal.

Rendered mute and damaged heavily, to the point that his memory cells are malfunctioning, B-127 limps from the burning site, and collapsing by the shore of a lake, manages to scan a yellow Volkswagon Beetle on nearby beach before he enters stasis.

Meanwhile, in Brighton Falls, aspiring teenage mechanic Charlie Watson is enduring a miserable day of dealing with bullies at her fairground vendor job at Hot Dog on a Stick, and is at odds with her mother for having remarried despite her still grieving over her father's untimely death. Hanging out at junkyard ran by her uncle Hank, she discovers a worn yellow VW Beetle under a tarp. Immediately falling in love with it, she asks her uncle if she can buy it, offering to work there yearlong to get funds, but he simply gives it to her as a birthday present, provided she can get it running. When she manages to turn it, a radio signal plays out, in actuality is a transmission signal from the dormant B-127. While on one of Saturn's moons, the two Decepticons mercilessly amputate, torture then bisect Autobot Cliffjumper who played the signal. Shatter traces the signal to planet Earth. Shatter and Dropkick arrive on Earth explosively, encountering a redneck couple at a gas station. Scanning muscle cars as their alternate modes, Dropkick blasts and kills the male one before they go searching. They are then confronted by a Sector Seven and United States military blockade on the road with Burns present. Shatter feigns proposing an alliance with them, easily earning their trust because the United States is desperate for acquiring technology that can defeat the Soviet Union. The Decepticons claim that they are the "good" guys of the war between the Transformers and that B-127 is a fugitive and traitor.

Back at home, Charlie is tinkering with the car, but when a strange appendage falls from the bottom, she looks under to see a huge metal face. Suddenly, the car activates and slowly transforms into B-127. Rendered amnesiac due to his serious wounds, Charlie is astounded by him. Initially scared of her, the Cybertronian warms up to her. Unable to talk due to being mute, the buzzing his broken voicebox makes leads her to dub him "Bumblebee". Charlie unlocks a holographic message sent to Bumblebee by Optimus Prime: Optimus announces that he is coming to Earth and instructs Bumblebee to keep Earth safe until his arrival. Bumblebee then remembers what happened during his departure, and the viewer is shown Optimus fighting off the Decepticon armada led by Soundwave. The flashback ends with Optimus being charged at by hundreds of Decepticon seekers.

Bumblebee and Charlie have some fun together such as getting back at a bully (Tina) who's been harassing Charlie by destroying her car and evading a highway trooper. When Charlie for one day leaves Bumblebee at home, he curiously enters the inside of her home and accidentally destroys much of the house even giving away his location to Sector Seven by putting his finger into an electrical outlet that allows Dropkick and Shatter to pinpoint where he is: Brighton Falls.

Charlie and her family are apprehended by Sector Seven while Bumblebee is captured, chained up and tortured for information regarding Optimus Prime's whereabouts by Dropkick and Shatter. Bumblebee then unleashes yet another holographic message by Optimus Prime, who announces "Regroup, rebuild and retake our home!" and a reminder that the Autobots plan to come to Earth. Dropkick and Shatter decide to transmit a signal to Cybertron that will bring in the entire Decepticon army to Earth thus eradicating the entire Autobot resistance with Dropkick adding "We'll burn the whole planet to cinders!" Dropkick uses his laser cannon to shoot down Bumblebee. Charlie electroshocks Bumblebee so that he can regain consciousness and go stop Dropkick and Shatter from transmitting the signal to the Decepticons. However, they are again attacked by Burns and Sector Seven, forcing Bumblebee to use physical force on them and escape with Charlie. Charlie's stepfather arrives to block S7 from getting to his daughter or Bumblebee.

Bumblebee battles Dropkick and Shatter while Charlie climbs the radio tower that Shatter is using to call upon the Decepticons. Burns in a helicopter also arrives to combat Shatter while Bumblebee fends off Dropkick before finally using a chain leash to tangle and then rip apart Dropkick. Shatter shoots down Burns' helicopter, but Bumblebee catches him in time from crashing into the ground. Before Shatter can shoot down Charlie as retaliation for disrupting the signal, Bumblebee shoots down Shatter but she survives the blast, and physically combats Bumblebee before he shoots down a dam that unleashes water as well as an aircraft carrier. Bumblebee forces Shatter to remain motionless so that the aircraft carrier can crush her to death, and he wins the battle. Bumblebee and Charlie flee but not before Burns salutes them and orders them to run from his friends who are coming in.

Optimus Prime finally does arrive (in the form of a Freightliner truck) at the Golden Gate Bridge in San Francisco, California and Charlie shares one last hug with Bumblebee as an emotional goodbye. Bumblebee scans a Chevrolet Camaro and regroups with Optimus. Charlie drives back home in her brand new Chevrolet Corvette C1. While in a forest, the two Autobots witness several more coming in comets.