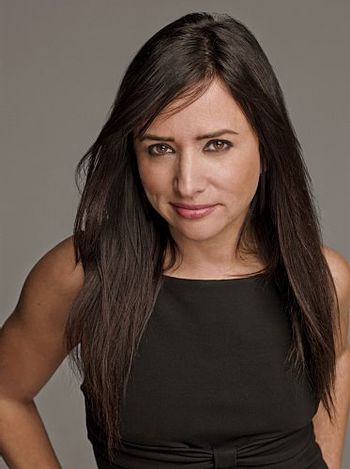 Pamela Adlon (born July 9, 1966 in New York City, New York, and often credited as "Pamela Segall"note her maiden name, "Pamela Segall-Adlon," or "Pamela S. Adlon") is an American-British actress and voice actress. She started her career as an actress, appearing in the notoriously awful sequel to Grease Grease 2 and The Facts of Life. However, when things got rough as she got older, she got into voice acting. Adlon mostly voices prepubescent and pubescent boys (some of which are notorious for being very loud, very weird, and/or very energetic if they're prepubescent. The pubescent boys she plays are either bullies, not very intelligent, or socially awkward), such as Bobby Hill (King of the Hill), the title character on Pajama Sam, Milo Oblong on The Oblongs, and Otto Osworth on Time Squad (for which she was nominated for an Annie Award for Outstanding Individual Achievement for Voice Acting by a Female Performer in an Animated Television Production for the first episode, "Eli Whitney's Flesh-Eating Mistake"), though she has voiced girls, such as Ashley Spinelli on Recess, Moose (real name Margaret Rose) Pearson on Pepper Annnote though it is very easy to mistake Moose for a boy, given her appearance and the fact that Segall has voiced boys before, and the Debbies (a gaggle of look-alike snobby blondes who live on the rich side of Hill Valley) on The Oblongs.

Despite being known as a voice actress, Adlon also still works on camera, having appeared in Californication and Louie (where she's also a producer), and starring in Better Things, which earned her an Emmy nomination for Outstanding Lead Actress in a Comedy. She has three daughters with her ex-husband Felix Adlon, and Better Things' plot was based on her life with them.

Example of:
Somebody Set Up Us the Bomb