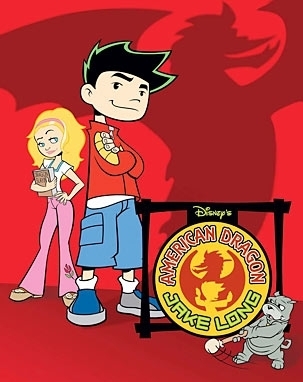 American Dragon: Jake Long (2005-2007) was a Disney Channel cartoon created by Jeff Goode about a young teenager growing up in a world full of weird goings-on.

OK, so that's almost all Disney Channel cartoons. More specifically, Jake Long is the "American Dragon", a cocky, brash youngster with the power to shapeshift into his reptilian alter-ego, serving as a sort of superhero for the magical creatures that live in secret in the human world.

Each episode is usually focused on completing a task brought on by his supernatural responsibility, and the conflict it brings with his personal life at school. His grandfather, who also has dragon powers, serves as his mentor and teacher. The series makes extensive use of fantasy and folklore creatures the world over, often with subtle twists for comedy purposes.

The biggest running plot lines are Jake's budding crush/romance with a girl named Rose, and his battles with a shadowy villain named The Huntsman and his sidekick Thorn Huntsgirl, leaders of The Huntsclan.

Other recurring antagonists include Professor Rotwood, a German PhD who was discredited as a scientist for believing in the supernatural, and was forced to become a junior high school teacher (who, ironically, sees many of the supernatural events that happen around Jake) and Eli Excelsior Pandarus, a celebrity wizard and mystical equivalent to a Corrupt Corporate Executive, and Dark Dragon, reportedly the only of his kind to ever go bad.

The show's second season comes with a major overhaul of the design and style of the series, spearheaded by producer Steve Loter (also of Kim Possible). While thoughts on the visuals are divisive, it's generally agreed upon that the change is also intertwined with the series finally Growing the Beard, with a greater emphasis being placed on plot progression and character development, and some of the more obnoxious elements like Jake's slang being toned down.

The series ended in Fall 2007 after a run of 52 episodes and a slew of Executive Meddling. Strangely enough, a similar premise of an urban Chinese-American teenager as The Chosen One protector of a hidden world of magic existed in the concurrently-running Cartoon Network show The Life and Times of Juniper Lee.

open/close all folders
Tropes A to F
Tropes G to L
Tropes M to R
Tropes S to Y
"Don't be all mean-beans, boooooi!