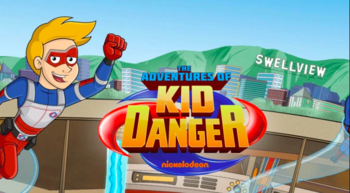 The Adventures of Kid Danger is the short-lived animated Spin-Off of the Nickelodeon show Henry Danger. Like the original series, this show is both created and produced by Dan Schneider, in his first (and only) animated production, as well as his final production before his departure from Nickelodeon on March 26, 2018. With animation by Texas-based Powerhouse Animation Studios (of Castlevania (2017) fame) and South Korea's Saerom.
Advertisement:

The show premiered on January 19, 2018 and follows the heroic Kid Danger and Captain Man as they embark on brave new adventures battling bizarre criminals and super villains with their sharp wit and amazing crime-fighting skills.

Besides the fact it's animation and not live-action, other factors that separates it from his other works are the lack of a Laugh Track and a Two Shorts format. All the principal cast members of Henry Danger reprise their roles for this series.

The series wasn't picked up for a second season due to Dan Schnider's exit from Nickelodeon. In the United States, you can watch episodes of the show here