Video Game / The Adventures of Hyperman 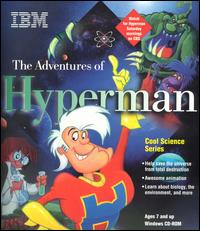 The Adventures of Hyperman is an educational computer game published in 1995. The story involves a big green blob named Entrobe and his sidekick, Kidd Chaos, escaping from an intergalactic containment warp due to a mathematical meteor, accidentally created by a young scientist named Emma C. Squared who was trying to crack the ultimate unifying theory, breaking through. With Entrobe escaping unto Earth, Hyperman is sent to stop Entrobe and trap him once more. This is a point-and-click adventure game that's fondly remembered by most people who owned the IBM Aptiva computer which came bundled with The Adventures of Hyperman.

The game was turned into a cartoon series that aired Saturday mornings on CBS and only lasted 13 episodes before it was canned. Until 2021

, no episodes had ever been recovered, nor given any official release.

the videogame
the TV series