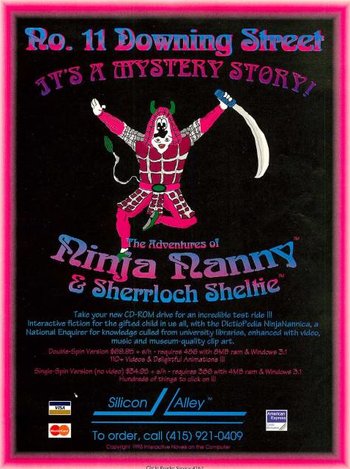 No. 11 Downing Street: The Adventures of Ninja Nanny & Sherrloch Sheltie is an obscure Edutainment Game released in 1993 for Windows 3.1. It's most well known for having an obtuse story, containing poorly-linked educational materal, and being overall extremely unusual. There were at least 2 episodes planned, but only one was released.

The basic plotline of the story is that it follows a cow named Norbetina as her life goes through a ton of twists and turns, meeting eccentric characters and eventually teaming up with the mastermind detective Sherrloch Sheltie. She also catches the eye of an international criminal named Baron von Moribund who has his team of operatives try to hunt her down for some unknown reason. The educational parts of the game are essentially reading material that can be accessed in the story by hot words, providing text, pictures, and even videos. The hot words also provide low-grade, bizarre animations and describing them doesn't do them justice.

The game is abandonware, and the ISO can be found on on archive.org here

Tropes found in The Adventures of Ninja Nanny & Sherrloch Sheltie: