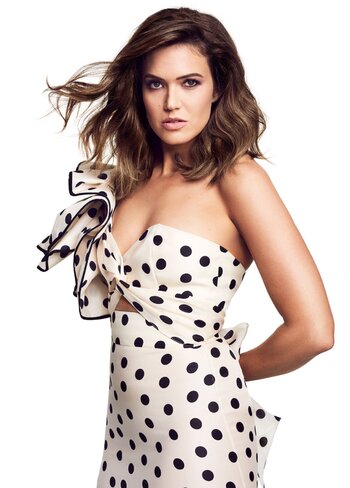 Dreaming of, and probably finding, some Wild Hope, for that's where her life begins.
Advertisement:

Amanda Leigh "Mandy" Moore (born April 10, 1984) is an American pop singer and actor, best known for looking pretty and turning out to be quite a bit more talented than you'd expect from someone so ornamental.

Moore released her first album, So Real, in '99. She was the last of the "pop princesses" to debut, following in the footsteps of Britney Spears, Christina Aguilera and Jessica Simpson. While successful through the early 2000s, she was frequently compared to said fellow pop artists. It wasn't until her fourth album, released in '03, that she came into her own as a musician.

Moore also transitioned over to acting during this period, headlining The Film of the Book A Walk to Remember opposite Shane West. Critics had some good things to say about her performance. Gamers will also be pleased to note that she had a brief turn voicing Aerith Gainesborough in Kingdom Hearts (before being replaced by some combination of Andrea Bowen and Mena Suvari). Her next major film role was the Darker and Edgier Saved!, a Black Comedy satire of Christian High School life; it's quite obscure, but people liked what she did with the role. She has had TV roles on The Simpsons, Grey's Anatomy and Scrubs, opposite then-boyfriend Zach Braff. Most recently, she voiced and sang for the Disney Princess Rapunzel in Tangled, which predictably did some pretty good things for her career considering how well it was received. She went on to play the titular role in Sheriff Callie's Wild West, an animated Western for Disney Junior, and reprised her role as Rapunzel in Sofia the First and Ralph Breaks the Internet. From 2016 to 2022, she starred in the NBC drama This Is Us as Rebecca Pearson, a mother to three children.

Moore, who was married to country singer Ryan Adams, returned to music in 2020 with her first album in 11 years, Silver Landings, and has even ventured into fashion. She is currently married to musician Taylor Goldsmith and they have a son, August.