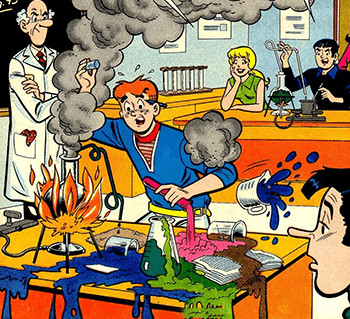 A promising student, though just a learner,
Blew himself up with a Bunsen burner.
If only he'd had a bit more ambition,
He might have done it with nuclear fission.
— Anon
Advertisement:

There's no better way to make a lesson stick than by adding explosions. People in teen comedies picked up on that years ago.

Nothing on God's green earth is more volatile than the science laboratory materials of a fictional high school. Not even Tokyo. Experiments can be reasonably expected to combust, detonate, singe off a few eyebrows, cause Ash Face, scorch the ceiling, blow out windows, force the evacuation of that wing of the building and/or attempt to attack their creators. If they don't, the class Gadgeteer Genius builds a transdimensional collapsatron out of paperclips.

This is not in the least helped by the teachers, as this is a popular position for the Professor or Mad Scientist. Often they have left a university or a private research institution, possibly through the roof. Compare Disastrous Demonstration and Explosive Results.