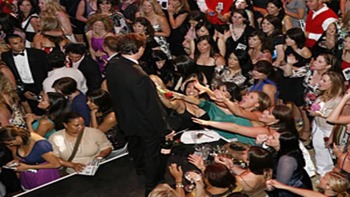 Going once, going twice
Every man here has a price
Over where? Over there!
Sold to not a single lady in here
"The Bidding", Tally Hall
Advertisement:

This is a common trope in Live-Action TV comedies: A bunch of male characters get together for a "date auction," usually for charity, and the plot is usually written from the results. Expect these to happen:

Note there are rarely any bachelorette auctions. However, there are occasional "basket auctions." In these, a woman will bring a basket to auction, and men will bid on the basket so they may have lunch with the ladies.

Note that those auctions are public and legal, and people take part on their own free will. If criminals hold a secret auction to sell captive Sex Slaves to the highest bidder, see Human Traffickers instead.

For cases in which a famous person is "won" rather than "bought" and the winner's intentions are not necessarily romantic, see "Meet the Celebrity" Contest.

A Sub-Trope of Auction.