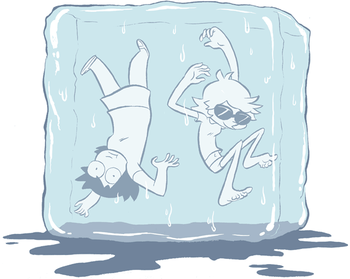 Eve on the left, Hanna on the right.
Advertisement:

was a Slice of Life Web Comic written and drawn by Meredith Gran. It centered around the daily life of twentysomething Everest Ning (Eve for short), her stoner roommate Hanna, and their circle of friends. The story was set in modern-day Brooklyn, NY.

The stories mostly revolved around Eve's everyday life, dealing with her family's quirks, her roommate's bizarre antics, and trying to find romance, fulfillment, and a job that doesn't suck.

, the comic is in reruns with author commentary.