Film / I Am Somebody 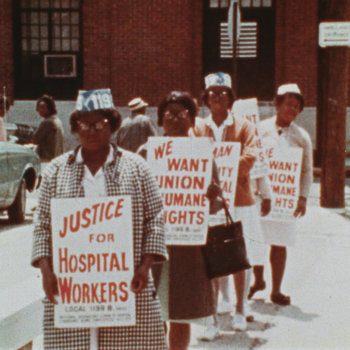 I Am Somebody is a 1970 short film (28 minutes) directed by Marian Anderson.

It is a documentary of the 1969 hospital workers' strike

in Charleston, South Carolina. In March 1969, nurses' aides and workers at the Medical College Hospital in Charleston go on strike, protesting poverty-level wages ($1.30 an hour) and the unjust firing of 12 pro-union hospital employees. Local 1199B walks out of the job and begins picketing the hospital. Soon workers at the Charleston County Hospital join their strike.

Pretty much from the beginning, the strike is also a protest against racial discrimination, white supremacy, and sexism, as an all-black, almost all-female force of minimum-wage workers goes up against the entrench white power structure—the hospital president, the Charleston police department, even the governor. Civil rights leaders like Coretta Scott King (barely a year after her husband's murder), Ralph David Abernathy, and Andrew Young arrive in Charleston to give support to the determined workers, who refuse to back down.